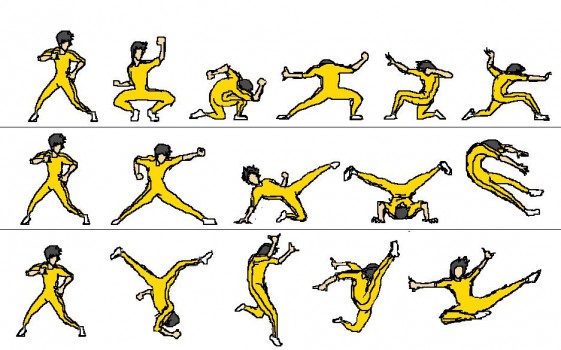 Very early in September, I began to revisit the HD port of Resident Evil 4. I had downloaded it more than a year previous as part of the Resident Evil 6: Anthology package, but—well—for hatred of the cowering Ashley and her tinny cries for help, I left it quite alone. Perhaps I feared, too, the wide, swinging, unpredictable arc of certain blade-tails belonging to las plagas; the raw stump of Leon’s neck as he crumpled to the dirt. I’m quite through my reservations now, and admit RE4’s rediscovery feels like a reunion, Separate Ways to Mercenaries to the Leon bit once again.

It was in this frame of mind—full of my regular interest in video game art-making and the warmth of reacquaintance—that I came upon our friends at Cartridge Lit and, on 9/16, the release of their first digital chapbook, PREPARE TO DIE. The tri-nominated title of this post likely reveals the extent of my anxiety considering exactly how such a DC is authored: there’s the writer, yes, but then the coder and curator; the man who took the screenshots; I was on my virtual horse to hunt down every programmer and renderer at Dark Souls HQ before realizing I had to stop somewhere. It’s modesty on the part of Joel Hans to give Jenkins a solo byline.

‘Modesty’ because it is precisely the interfacing of text and (often edited, always carefully arranged) video game materia that ought to make PREPARE TO DIE an event unique to Cartridge Lit’s raison d’être—otherwise, editors Hans and Justin Lawrence Daugherty would simply have kept up their business of publishing standard-form writing about video games (much of which is quite good). Part of the business of critiquing a piece like PREPARE TO DIE, therefore, is in discussing its success ‘hybridizing’—making both writing and game content feel vital to the thinking eye’s artistic experience. It is by these markers I want to judge.

Not just by the slick, engaging visual effect. Not just for its pop-based ‘anti-art’ redolence. Not for its being so ‘cool’ (and it is).

It bears noting that Cartridge Lit acknowledges the term ‘literature’ as a high art gambit—one they want to engage. The website reads:

I’ll grant this seems more like a call for criticism about video games than creative writing on video games (if video games are already literature, wouldn’t ‘literature on literature’ be the highest kind of criticism?), but, taking the editors at what I fancy their intention, a reader has every reason to expect the poetry in PREPARE TO DIE to be one of investment, gift, and some singularity.

On this front, I’m not sure Jenkins delivers. My primary concerns are twofold: inattention to elements of form; and what I deem a failure to create an immersive experience.

In terms of form, and as a convention, Jenkins’ use of the pipe (‘|,’ vbar, vertical bar, stick, polon) is regularly troubling: it is just not clear how the speaker expects us to read the mark. In the very first poem, the pipe simultaneously acts as a ‘stop’ or ‘reset’ punctuation (‘[ . . . ] they’re very long & low grade / stone | stamps till it aliases at the vanishing point [ . . . ]’) and as an in-line enjambment (‘[ . . . ] no memorial in / the gigs | of mythology for the / men who built these walls [ . . . ]’), giving the reader a sense that the speaker is either (i) being cheeky, or (ii) doesn’t really care whether she is understood in her convention. Having done a bit of outside study, I see this isn’t the first time Jenkins has used the convention, but such study does not advance a theory of why the pipe is preferable to a more immediately apprehensible piece of punctuation.

Yes, yes, the pipe has certain established uses across mathematics, physics, and computing, but none of these uses are intuitively translatable to verse—it’s clear, for example, that Jenkins doesn’t mean for us to read the pipe as a substitute for a break-indicating slash (see both the layout of the poem linked directly previous and, in PREPARE TO DIE, the third line of “Under hypnosis eyes spinning”), my only immediate relation for it. As a reader, I can accept poetic shakeups without an asterisk to spell out sensibility; what I cannot accept is a shakeup that fails to teach me, in practice, what it’s about. The fact that Jenkins dispatches with the pipe entirely in certain poems (as “My shoulders curve like elbows an a nutshell encasement”) only heightens my suspicion about its utility.

Other such moments of wilfulness (or slack editing?) involve hyphens that function like emdashes; inconsistent habits of capitalization; hyphens that break just bits of a suffix (“Under hypnosis eyes spinning,” “Fleets of labor made this marked infrastructure”) and small errata like ‘bitmap’s, hem’ or ‘grip san / shield.’ I could go on. Why do I keep up with this infernal pecking? Why, to illustrate a direct readerly result of my suspicion about the pipe; it begets and begets suspicion, which keeps me from the poems’ content far too long.

That content. Allow me another short reference to RE4. For me, Leon S. Kennedy is no Chris Redfield, though he has his charms—what ‘curious’ player can forget the simultaneous dose of shame and joy at swiveling the camera upward previous to ‘catching’ a waiting Ashley, only to hear her admonish: ‘Hey, what are you looking at?’ In that moment, one was less complicit with Leon—playing less as Leon—than the reverse; he had become the patsy for one’s bit of (relatively) innocent kiddy perversion—he took the fall, and I, for one, never forgot that courtesy. I forgave him all but his emo haircut. We became boys—if not a blurry iteration of the same boy.

It occurs to me now, of course, that not all of the game-playing public made meaning this way. Still, I hope the anecdote reveals what is underneath most thoughtful gamers’ interest in gaming: the dissolution of the boundaries of self and world; imaginative identification. On this fore as well, I find certain of Jenkins’ choices unsatisfying.

Of primary dissent is the speaker’s choice to pepper moments of writing in persona (or at least ‘in-game’) with reference to game mechanics. Instants like:

‘I’m warned to be wary of a charmer / THE PARDONER is here to / sell her “temp auto counter”, [sic] / miracles proffered by an AI |’

tend to divide a reader from Jenkins’ fantastic context (which is, after all, the essence of this sort of project) and from Hans’ constructed visual environs. While I’ll grant this may be a straightforward artistic choice on Jenkins’ part—that she might hope not to elide identities, but jarringly parse them—there are too many moments of full-poem elision (“Demon is a stupid word”) and full-poem ‘confession’ (“Now a note on the world economy”) to believe such a choice is theoretically purposeful.

Unfortunately, I lack the intelligence to speak about Hans’ virtuosity in setting and coding the stills in PREPARE TO DIE; by and large, I can only conjecture about what difficulties Duncan Harris had in original capture. What I can say is that—while striking and usually situated with some visual interest—the images are not inextricable from this art-making project, and they ought to be. Removing the images would leave us with quizzically formatted ‘lyrics’; removing the poems would leave a scrolling collage. To a certain viewer, either might have interest, and both together are enjoyable enough; but PREPARE TO DIE has not created the distinct mutant moment in genre for which I hoped.

And perhaps creating such a moment wasn’t Cartridge Lit‘s project at all; perhaps hinting at animation capabilities (as in “Evil does not work like a network”) and screen-read linear fade-in (one of my favorite visual moments—”Fleets of labor made this marked infrastructure”) was enough of VGs; perhaps a bit of good music (‘so much data pulsing is like shining,’ ‘I can see each fishing line / ease it like a puppet’) and ye olde cosmetic & too-liberal simile (‘murder is like shopping / a kind of satori’) was enough of the versified. I cannot help but want much more than this ‘coolness,’ though.

I can’t help believing, either, that the road through Hyrule that leads to a more mutated hybrid of poems and games will be chiseled by Cartridge Lit. PREPARE TO DIE shows some potential.

12 thoughts on “Mutant Genre and Jenkins, Hans, and Harris’ PREPARE TO DIE”