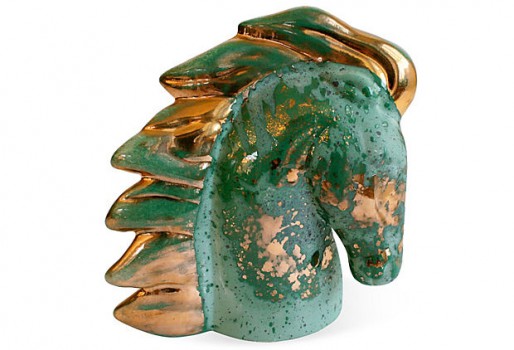 A horse stood alone in a pasture, the grass was high. The
horse’s heart was empty. The deep sameness of things held
her peacefully. Because the grass was high she seemed to
rise from the pasture, a figure floating in the green, the high
grass reiterating her motion as she passed. I thought the horse
was lonely and I grieved. The horse became my sorrow,
all the grief I could ever know or bear, and in the pasture
there was no more horse, no grass; the semblance of animal
haunted the day like an erasure on a page, like mist rising in
figured motion. The deep similarity of the world to itself,
the sameness of things, reverberated. Until I became, myself,
the horse in the pasture, until my mind would be still with a
loneliness that is empty of other worlds, until my mind is still
and the grass overtakes me.

[N.B.: This poem appears in AGNI‘s print magazine with all text—save the last line—justified to the right margin. Line breaks are honored, though our formatting limitations prevent said justification. —Ed.]

Cynthia Huntington‘s “Horse” is an unusual achievement in contemporary verse: the outright philosophical poem. Though the piece is couched in a quasi-illusory encounter with the equine (even that nomination sounds like high reckoning), its power wells at and extends from the speaker’s proclamation of the world’s ‘sameness’—’the deep similarity of the world to itself.’ The scene of the poem is a place of sedate witchery; the words themselves rise in ‘figured motion,’ pressing the mind with a beat that feels like one’s own pulse.

For me, this is no small accomplishment, because I patently disagree with the speaker’s philosophy—I cannot, however, shirk the sense that it is owed a place in my mind (as an aside, Glück’s “Telescope” offers a worthy counterpoint to Huntington—reading these two together gives great reflective joy). What is this ‘sameness’ Huntington so flatly asserts? The piece’s unfolding is situated only sparely (the grass is high; the horse is ‘alone’), giving it no truly definable locality; the speaker is able to view the horse clearly and become absorbed, though this defines no absolute proximity; the poem perhaps closes with death, perhaps with a new surmise that includes the sameness of grass to the self.

You see, Huntington has not only written about an idea here, but made the idea formally manifest in the writing of it.

That the poem has a predictably childlike (or child’s-story-like?) narrative linearity (the horse enters via a ‘pasture’; the horse is seen from a point of inferior verticality, making it feel large; the horse as admired object becomes a repository for the speaker’s latent desires; the hyperbolic ‘all the grief I could ever know or bear’; even the speaker’s insistence on repeating ‘sameness’ instead of explaining it feels like fairy play) does not offend so much as soothe—perhaps perplex in its straightforwardness, since even the recognition of such a narrative choice does not yield up what ‘sameness’ contains.

The only line in “Horse” that stops me short of believing Huntington herself has fathomed such ‘sameness’ is the gaffe ‘The horse’s heart was empty.’ Here, the speaker’s benign ruminative tone is pushed past its limit into an arena it is not equipped to face—namely, the contents of a deeply alien autre. The line is completely unwise; or, more accurately, the speaker has appeared too wise to equate the ’empty’ with the ‘alone,’ or sameness with de jure nothingness, or an inability to comprehend the contents of the horse’s heart with its being empty (even if she believes that emptiness a boon). It’s another tribute to “Horse” that I have forced on myself a whimsical forgetfulness about just this—what I imagine the poem’s one ringing error.